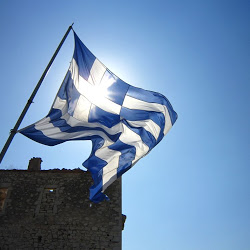 Readers may remember a few issues back where I proclaimed the glory of Japan’s Honen Matsuri, the festival of male fertility where it is all about the penis. And it got me to thinking that the idea of a fertility festival with a penis attached couldn’t not have started and ended in the Land of the Rising Sun. Somebody else must have come up with the same idea.

It turns out, they did. Not surprisingly, they’re Greek.
Tyrnavos is a long way from the bustle of Athens. The town is deep in the Greek backcountry (giggle), in the idyllic wine country of the central region of Thessaly, about midway between the capital and the city of Thessaloniki. The time to go is during the Grecian Lent, and specifically, on Shrove Monday, a day historically given over to lax morals. And I gotta say, we love a good, lax-moraled Greek. But this otherwise bucolic location is setting for one of the most scandalous folk festivals in the country, the Burani. Governments have attacked it, the Greek Orthodox condemns it, and anything that honks off both church and state is #1 in my book.
Like the Honen Matsuri, the Burani is all about the penis. Images of penises (or more correctly, “phalluses”) and other images of, shall we say, male genitalia in action are all over the town. While “initiates” start making merry, spinach soup (called “bourani”) is prepared, and anyone who passes by has to stir it with a ladle shaped like a pee-pee, and then take a taste from the pee-pee.
After the phallic soup-tasting, you have to down a shot of ouzo (yikes) from a penis-shaped tumbler. And did I mention the penis-shaped chair revelers have to sit on in? Men twirl in their hands good-luck phalli and everybody has a gay ol’ time with their penises. I am soooo not making this up.
The Burani as a festival is only about a century old, but it springs from an antediluvian source: Dionysus, the God of Wine and Revelry. Phallic imagery was central to the worship of this guy, but not for the reasons you’d think. A deity inextricably bound with vegetation and the seasons, the Greeks beheld in Dionysus an interesting parallel—they saw in plants growing, bearing fruit, and then wilting and dying with the coming of winter a mirror image with the flaccid/erect/flaccid cycle of a man’s penis. This idea is found all over the ancient Mediterranean; gods like Adonis and Tammuz have the exact same associations. Not to be a buzzkill, but like the Honen Matsuri, the Burani is not about actual penises as it is about fertility.
At least, in theory.  Steele Luxury Travel has discounted economy and business class airfare to Athens along with exclusive hotel perks!  Visit www.SteeleTravel.com for more information!