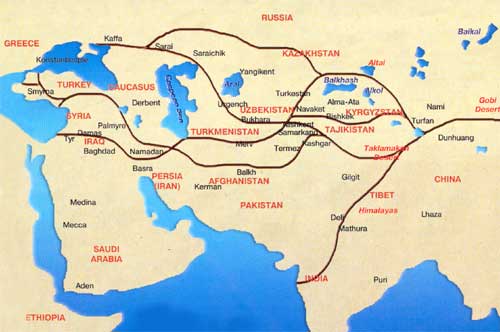 An intrepid Italian went one way on it, marauding Mongols went the other way on it, and thousands of years before, around the time of the Trojan War, the peoples of East and West probably met for the first time because of it. The Silk Road saw some of the most momentous events in human history, and thanks to Zulya Rajabova, the most famous trade route in history is now once again open and ready for business.

When it was that a series of vaguely connected foot-trails morphed into “the Silk Road” is a matter of conjecture, but it’s a good bet that the route is at least 3,000 years old, used by traders and armies alike. Several cities owe their existence to it; Alexander the Great built entirely new towns just to guard it. Today, a new version, with asphalt and street lighting, is primed to once again link Orient with Occident.
Contrary to the name, the Silk Road in its day was actually a massive network of roads and sea-lanes starting in Xi’an in China and ending, depending on whom you ask, in Baghdad, Antioch, or Constantinople. It went as far north as Mongolia and Russia, as far south as India and Indonesia, and bristled with offshoots linking to Egypt, the Swahili Coast, and Scandinavia. Along the way are some of the most exotic cities ever to rise: Samarqand, Kashgar, Merv, Bukhara, Baku, Tbilisi, Urgench, and lots of other places you probably never heard of.
Trying to find someplace that none of your friends have already visited (and talked on and on about ad nauseam) isn’t so easy anymore; Central Asia, long locked away as part of the Soviet Union, remains one of the great untouched regions when it comes to travel, and it only makes sense that the mighty Silk Road would be instrumental in letting the outside world in, just as it did thousands of years ago.
For more information, contact Steele Luxury Travel at 646-688-2274.
Steele Luxury Travel
www.SteeleTravel.com