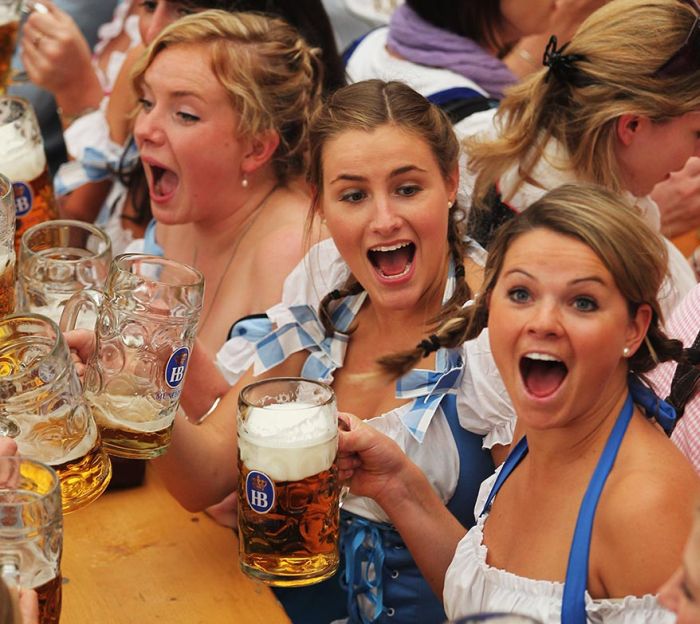 Deep summer in Florida. For all of you overheated Wire readers, it’s time to think cool thoughts.

Humanitarian that I am, I’m going to whisk you to the cool climes of Germany in October. Or, should I say, “Oktober,” as in “Oktoberfest.”
Never ones to miss a party, Germans have all but commandeered the other festivals of Europe, but you ain’t seen nothin’ yet until you check out what is probably THE native German holiday. Beginning on September 21 and running to October 6, Oktoberfest actually happens all over Germany, from the grand cities of Berlin and Frankfurt all the way down to the little villages you’d drive through on a foggy night and not know they were there. However, if you want to do this right, there is only one place to go: Münich.
For those of you who never took geography, Münich is in Bavaria in Germany’s deep south. A picturesque city that mostly avoided getting bombed flat in WWII, the city would be a hotspot for visitors even if it wasn’t particularly boozy, but hey, whatever gets ‘em in the door. The traditional Münich Oktoberfest is the biggest beer festival in the world, and as with any party, there is always a gay contingent. In fact, there is a whole gay day — Rosa Wiesn, the first Sunday after the official opening of the beer tents/halls. Head over to the Bräurosl Tent and settle in with thousands (yes, thousands) of other LGBTQ beer drinkers downing a flagon of Germany’s best while getting their fetish for Lederhosen/Dirndls on.
I’m pumping up Oktoberfest now for a few reasons. The first being that if you are ever going to go to Germany, this is about as good an excuse as it gets. The second is that everybody already knows that. While it might be safe to say that balmy Spain or Greece probably pulls in the lion’s share of tourists, there is one week when Germany reigns supreme…which just so happens to be the same week when all the German hotel rates skyrocket. Here is where being an early bird really works in your favor.
As does packing a spare liver.
For more information, go to rosawiesn.deor contact Steele Luxury Travel to arrange a fantastic Oktoberfest trip for you and your gang!