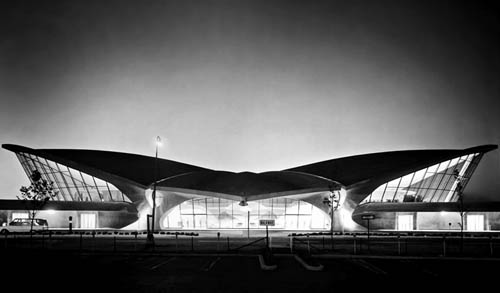 JetBlue is opening its new T5 facility at John F. Kennedy International Airport by honoring TWA, whose terminal stood on the site of the new terminal for decades. Ruth Richter-Holden, the daughter of TWA co-founder Paul E. Richter Jr., has begun a five-day journey bridging aviation history with its future. She and her crew will fly a 1937 Lockheed Electra 12A, one of TWA’s first executive aircraft, from California to New York City, culminating in the celebration of JetBlue’s new Terminal 5 at JFK on Sept. 22, 2008.

“JetBlue’s new Terminal 5 at JFK will literally connect to our aviation history, via the famous ‘flight wings’ of Eero Saarinen’s landmark TWA Flight Center,” said Todd Burke, vice president of JetBlue Corporate Communications. The aircraft was owned by TWA in the 1940s, when Richter-Holden’s father was executive vice president, and was used for high-altitude research and executive transport. In 2005, through a twist of fate, Ruth Richter-Holden was introduced to the plane when the owner contacted her looking for historic details in order to sell it. Driven by a faint memory and gut feeling, Richter-Holden purchased the 12A sight unseen and as she exclaims, “brought her back to TWA.”