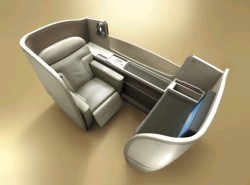 Tokyo – Japan Airlines (JAL) will start introducing on US routes a luxurious new suite to JAL First Class and a leading-edge seat to JAL Executive Class Seasons, the airline’s branded business class. The airline will launch the JAL Suite in first class and the JAL Shell Flat Neo Seat in business class when the airline introduces new 777-300ER aircraft on US routes, starting with the Tokyo – New York route on August 1, 2008.

Brand new 777-300ER aircraft fitted with both the new suite and new seat will start operating every other day on the Tokyo–New York route (JL005/ 006) on August 1, 2008, going daily on August 11. This will be followed by the Tokyo–San Francisco route on September 13, 2008, and the Tokyo – Chicago and Los Angeles routes in FY2009, the year starting April 1, 2009.
The popular JAL Premium Economy service with the innovatively designed JAL Sky Shell Seat, plus the airline’s very latest economy class seats will also be introduced on these aircraft at the same time. Passengers travelling on these US routes will, therefore, be able to experience, in all classes of travel, the very best seating and service available in the skies today. For full details on the new JAL seating, be sure to visit JAL’s website.
var gaJsHost = ((“https:” == document.location.protocol) ? “https://ssl.” : “http://www.”);document.write(unescape(“%3Cscript src='” + gaJsHost + “google-analytics.com/ga.js’ type=’text/javascript’%3E%3C/script%3E”));var pageTracker = _gat._getTracker(“UA-5877242-1”);pageTracker._trackPageview();