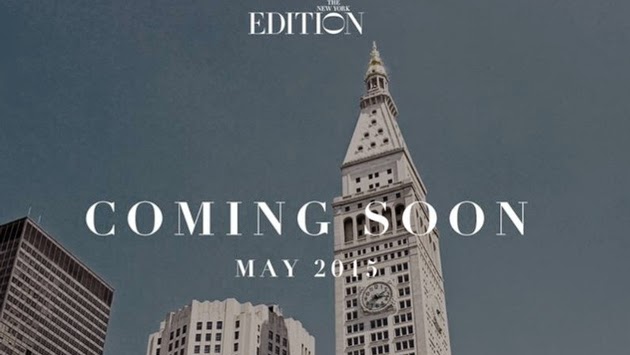 Hotelier Ian Schrager’s partnership with Marriott Hotels is finally hitting the Big Apple. The 273-room New York Edition hotel is set to officially debut on May 14 in the landmark Clocktower building located on Madison Square Park in the Flatiron District. The property, designed as a “hotel as private home,” is inspired by New York City’s turn of the 20th century private clubs, Fifth Avenue’s Gilded Age mansions and Stanford White’s architectural masterpieces.
The landmark Clocktower building (also known as the Metropolitan Life Insurance Company Tower) was originally built by Napoleon Lebrun & Sons in 1909 and until 1913 was the world’s tallest building. It features an Italian Renaissance revival architectural style and features a restored exterior and illuminated clock and spire.

The Edition will feature 273 residential-like rooms and suites with 360-degree views of the city, a 2,900 square-foot restaurant, a lobby bar, and a state-of-the-art fitness center and spa on the 39th floor.

Schrager’s partnership with Marriott to develop the Edition brand has had its ups and downs since it began in 2007. There are now Edition hotels in London, Istanbul, and Miami, though one of the first Edition properties, located in Hawaii on Oahu, was rebranded after a dispute with the hotel’s owners. Now Edition is finally in New York, back in the city where Schrager began as a hotelier with boutique hotels as part of Morgans Hotel Group and also launched his famed Studio 54 nightclub.
Some of the hotel’s main features include:

Restaurant: The hotel’s restaurant features food by London’s hottest young chef Jason Atherton, two bars, and a billiard room. Located on the second floor overlooking the park, the restaurant has three intimate dining rooms, a parlor with a billiard table and a library serving cocktails, after-dinner drinks, and dessert.

Rooms feature original herringbone oak floors, original mahogany wainscoting on the walls, and a restored Venetian plaster ceiling. Velvet chairs and banquettes, upholstered in rose, green, and blue, are inspired by the vibrant colors of the Dutch masters. Each of the three dining areas has a large chandelier by modernist designer Eric Schmitt.

Rooms: The property’s 273 guest rooms are located above the lobby and restaurant. Guests enter into a dark oak wood paneled foyer, much as they would if they were entering an upscale New York apartment in the 1920s. Many of the suites have 180-degree views of Manhattan and the 1,400-square-foot penthouse apartment has 360-degree views. Each room has a classic, extra long and deep floating white oak desk, inspired by Jean-Michel Frank, and a bed with a dark walnut headboard and a custom-built walnut platform.