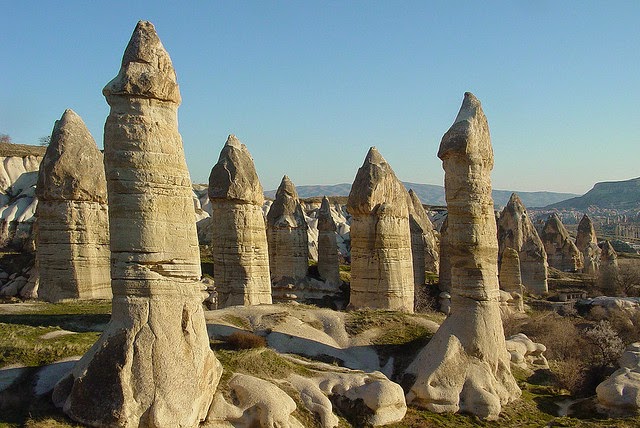 Hard Rock
The ancients were not quite so squeamish as we are today about what archeologists call “ithyphallic symbolism.” That’s a very fancy way of describing the phenomenon of seeing a naturally occurring feature and, because of its taller-than-it-is-wide shape, giving it attributes related to or of a penis. Such locales abound the world over. Curiously, cultures that had nothing to do with each other came to the same conclusions about this funny-shaped rock or that funny-shaped tree, proving that a good penis truly can bring the world together. For example:
Love Valley
Gotta love the name! This vale in the Cappadocia region of Turkey is a fairyland of fluid-looking natural “towers,” the result of millennia of erosion of a soft kind of rock called tuff. But some tuff is harder than others and so resists wear better. If that harder layer is on top the spire, it results in a tower having a bulbous top and a narrower neck, looking exactly like a…
Kodachrome Basin State Park
Oh. My. God. I don’t even know where to begin with this one. This park in Utah has geological features similar to a lot of parks in the American West, like Monument Valley or Bryce Canyon. One spire, nicknamed “Big Stoney,” however, takes the cake. Just Google it. It is unbelievable.
Grandfather Rock
A formation on the popular Thai island of Koh Samui, the shape is unmistakable. “Hin Ta” to the natives, it is actually a popular spot for photo-opping honeymooners.
Gunung Mulu National Park
Now it is getting hardcore. Unlike the features I mentioned above, this one is a stalagmite that eventually grew to the ceiling in Lang’s Cave in Borneo. What is the big deal? The way nature worked it, this ithyphallic column grew straight into a very suggestive-looking cleft in the cave’s roof. You can take it from there.
Cock Rock
Don’t give me that look; that’s just what they call it. Located in the astoundingly well-named Arizonan town of Carefree, this stone is the odd-man-out in that it shows nature in a…um…a “state of relaxation.”
Iao Valley
This valley in Maui is a perfect example of how something can look totally innocent from one angle, and totally something else from another. The famed Iao Needle is actually where a mountain range comes to an end. Looking at from the side, it looks like a wall of rock. But look at it from the end and it looks just like a man-part. The Hawaiians thought the same thing, so you know. The Needle is said to be the man-part of the god Kane.
Steele Luxury Travel
www.SteeleTravel.com