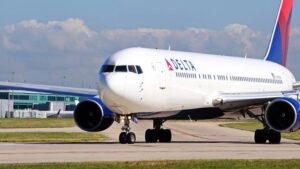 Almost three years after committing to adding a non-binary option for passengers booking plane tickets, Delta Air Lines this week said it pledges to make sure it happens in 2022.

The airline has been in the national spotlight in the last week after an Arizona mother criticized the Atlanta-based carrier for still featuring just male or female choices when booking.

The mother, Dawn Henry, tried to surprise her 21-year-old child with a ticket but did not see the option for non-binary. Non-binary means the individual identifies as neither male nor female, and many states – and at least two airlines – now accept the ‘X’ designation for gender.

In fact, the U.S. State Department issued its first gender-neutral passport in October of 2021.

But Delta did not offer that option. Henry then took to social media, and news outlets around the world picked up the story.

Now Delta says it dropped the ball and will rectify the situation it promised to address in 2019.

“Delta Air Lines is a proud, long-time supporter of the LGBTQ+ community and we understand that being seen and acknowledged is part of having an equitable travel experience,” a Delta spokesperson said in a statement to NBC News. “While we quickly shifted focus due to COVID in early 2020 to helping customers navigate the rapidly changing environment and government regulations, we are back on track to be able to offer a non-binary gender option in our booking systems in 2022.”

Delta would join American and United in offering a non-binary option during the booking process. Those three carriers were part of a group of six major airlines pledging to add non-binary options. To date, Delta, Alaska Airlines, JetBlue and Southwest have yet to do so.

“There’s a major problem with Delta and possibly some other airlines not adapting their computer system to correspond to the reality that people have official government documents that recognize their nonbinary gender identity,” Josh Block, a senior attorney for the American Civil Liberties Union’s LGBT & HIV Project, told NBC News. “…Businesses have an obligation to make sure that nonbinary people have equal service, and if that requires investing money to update your computer system, then that’s what a business needs to do.”