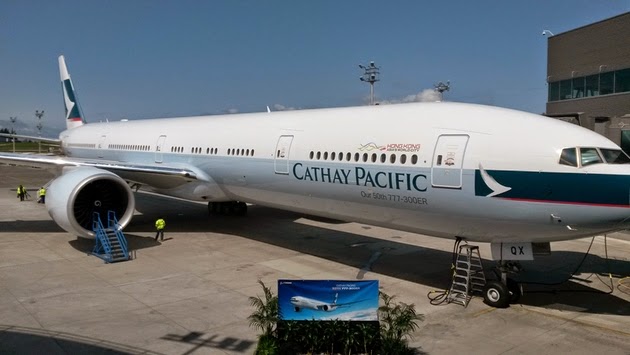 Boeing is one of the world’s premier plane manufacturers, and the company is celebrating the delivery of the 50th 777-300ER aircraft to Cathay Pacific Airways in Hong Kong.

According to Boeing, the delivery of the extended range airplane will give Cathay Pacific its 67th 777 in the fleet. The company also owns several other Boeing aircrafts, including 12 777-300 planes and five 777-200 planes.

Cathay Pacific has also ordered three more 777-300ER planes—the super-efficient, long-haul planes are perfect for international travel—and is one of the companies that will be getting some of the first versions of the newly launched 777X with 777-9X airplanes.

Boeing senior vice president of sales for Northeast Asia, Ihssane Mounir, released a statement regarding the relationship between his company and Cathay Pacific:

“We truly value the confidence Cathay Pacific have demonstrated in the 777 program as well as Boeing’s products and services across the board. We are honored that the 777-300ER continues to play a prominent role in the success of Cathay Pacific’s business expansion and we look forward to expanding our partnership with the new 777X in the years to come.”

According to the customer satisfaction surveys conducted by SkyTrax, Cathay Pacific was voted the world’s top airline for 2014, the fourth time the company has earned the No. 1 spot. With Boeing at the top of its industry, the partnership has been ideal for both parties.

As for the 777-300ER plane itself, it is the most fuel and cost efficient in its class, and can carry more cargo than any other passenger aircraft. Add in the fact that the Boeing model is one of its most popular long-distance planes and has won many awards, and Cathay Pacific is getting a good airplane.

What better way to celebrate a fruitful partnership between Boeing and Cathay Pacific than with the delivery of the 50th 777-300ER aircraft?